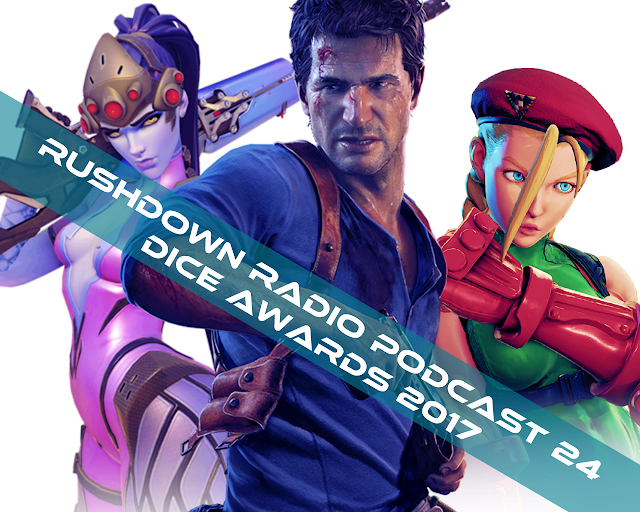 The DICE (Design, Innovate, Communicate, Entertain) Awards 2017 took place last weekend in Las Vegas. This year saw some of the biggest games both mainstream and indie take home top honors. Overwatch, Uncharted, and Inside took home multiple awards. Michael and Anthony discuss the nominees, the winners and the snubs. Anthony was especially vexed by many of the categories. There was a lot to discuss on this episode of Rushdown Radio.

Celebrating its 20th year of honoring the industry’s top games, The Academy of Interactive Arts & Sciences (AIAS), the non-profit organization dedicated to the advancement and recognition of the interactive arts representing its 33,000+ membership base, is pleased to announce the recipients of the D.I.C.E. Awards for the best games from 2016. Earning Game of the Year was Overwatch by Blizzard Entertainment, which challenges players to join the ranks of a legendary force of soldiers, scientists, adventurers and oddities, and clash on the battlefields of a near-future Earth. The awards were unveiled at the annual D.I.C.E. Awards ceremony, held at The Mandalay Bay Convention Center in Las Vegas earlier this evening.