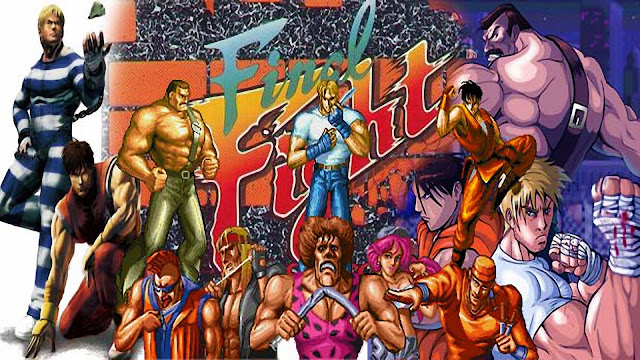 In the event that you take residence under or a rock or are one of those people who are oddly proud of not being up on current events, Capcom has released their latest Street Fighter V character, Abigail. Unfortunately, he was not the most well received character. In fact, I haven’t seen this kind of hate since Decapre, but that’s not what we’re here to discuss today. No, I’m here to address those who didn’t even know who Abigail was. Yes. That demographic of people who never played…Final Fight.
Before Capcom made their living from disappointing people, they were one of the best in the business. And in the era of quarter eating side scrollers, one of the best to do it was Final Fight. Metro City, a city torn apart by gang violence, can only be saved by a wrestler mayor, a “super hero” or something, and a Nike ninja. You didn’t need much more context than that. Find the Mad gear bosses, kick ass, move on to the next. 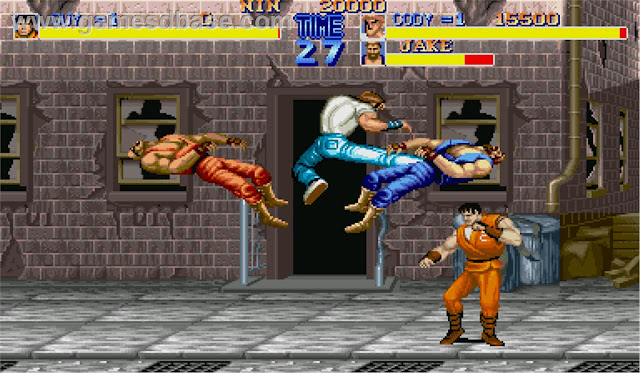 Final Fight was a game of its time, with most of the Mad Gear gang looking more like glam rockers than threatening gang leaders. I mean, look at Abigail. Aside from the proportions, that’s how he looked. Face paint, cheetah printed tank top (you can make it skulls now, but I won’t forget what I saw), and unnecessary chains and accessories. One thing I loved about Final Fight was the villains you met. They were so colorful and cool. It kinda made me want to see more of them. Maybe snippets of backstory somewhere.
As for our heroes, Cody is boring. I never liked him and I never really cared. Guy is a ninja. In sneakers. I mean…when your idea of ninjas are hooded men in the shadows and this red clad guy just runs up and starts kicking ass, you take notice. But FUCK THEM BOTH BECAUSE MIKE FUCKING HAGGAR! We wish we could have a mayor half as good as him! Crime out break? Fuck the suit and tie! He piledrive…drove… crime into the dirt and goddamn was Haggar cool. It could be that he is the reason I like larger characters in fighting games. Who knows. Who cares. Mike Haggar, man. 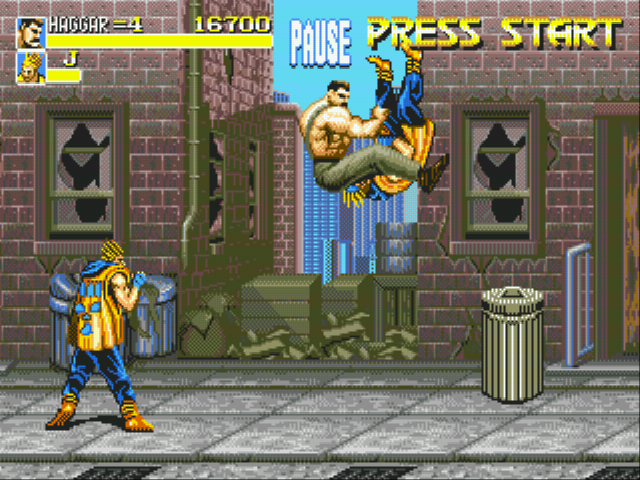 The Final Fight series is one I wish would have continued as it was clear that even to this day, Capcom can’t let it go. I mean, I’d buy a new Final Fight so long as they don’t go in the direction of  Final Fight: Streetwise. If you’ve never heard of that, consider yourself lucky. As for the good games, it’s clear that Capcom still thinks fondly of the characters as we’ve seen several of them pop up in later games. Cody, Maki, Guy, Haggar, Poison, Rolento, Sodom, Hugo, and even Edi E as a cameo come back to remind us that Final Fight was fucking amazing. What you’ll notice is that I talked a lot about the characters, but not a lot about the gameplay…well….
To be completely honest, it’s a beat-em-up. The game is about 40 minutes long if you are halfway decent at the game, you go from district to district smacking up people with pipes and katanas, and you smash trash cans in hopes of finding a life boost before the boss. In that regard, it isn’t special. So to set it apart, it had some damn good art and what they didn’t tell in words, they told in gameplay. Look at Sodom. Look at him. He’s stupid, but really interesting to fight. And come on, he’s hanging with glam rockers! This game was ridiculous enough to hold people’s intentions but not so ridiculous that it was disconnecting. 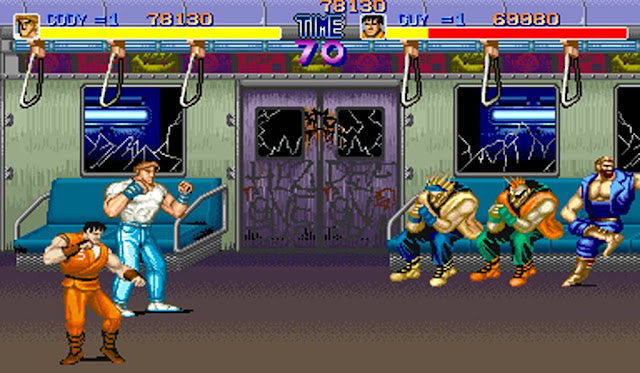 If you’ve never played Final Fight, I urge you to do so. Of course, legally I must advice you support the game through purchase but…however you play it, we here at Rushdown Radio will not judge. Just…play it and you’ll see what I mean. It’s not the most well aged series, but it’s definitely a good time.