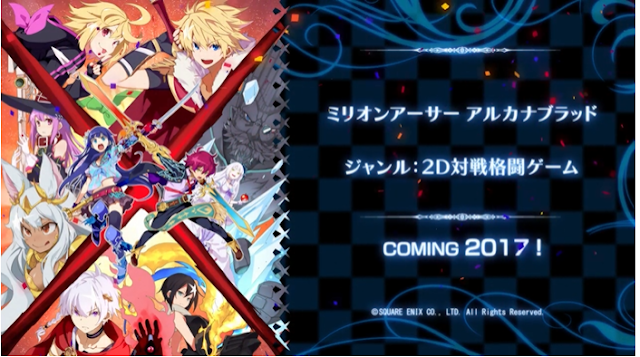 By some twist of events, SquareEnix has dropped a reveal trailer for their upcoming 2D anime fighter Million Arthur: Arcana Blood. SquareEnix has made some “interesting” fighting games back in the day when they were called Squaresoft. But most of their foray into fighting games have been 3D fighters like Tobal, Dissidia and Ehrgeiz. The reception of those games have been mixed to say the least.

Million Arthur: Arcana Blood looks like your typical anime fighter a la Melty Blood, Arcana Heart and Blazblue. The storyline is that our hero falls into a time distortion that sends him back to Medieval Britain. He is soon guided to Excalibur where he pulls the sword from the stone and becomes King Arthur. Somehow, he gets mixed up into some tournament (of course) that if he prevails, he can go back to home to his time.

From the little gameplay we did get, it’s obvious this game retains much of what you’d expect from an anime figher: Air Dash, jump cancels, chain combos, flashy special attacks, etc. It did appear that the characters were using special assists to aid them. Much of the mechanics haven’t been revealed yet and much of this is speculation. Unfortunately, this game will hitting arcades in Japan this year with no sign of a console or PC release. Take a look at the trailer and let us know what you think.