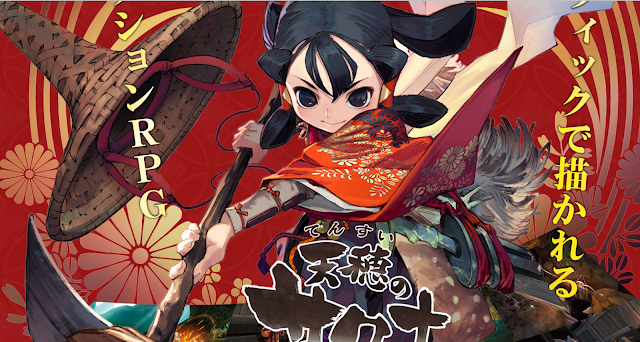 Japanese indie developer Edelweiss (Astebreed) and Marvelous/XSeed will be bringing the side-scrolling RPG Sakuna: of Rice and Ruin to the Playstation 4 and PC this winter. This game boast a gorgeous art direction and fluid seamless gameplay. I’ve adored Astebreed so much and think it’s one of the best indie games I’ve ever played. I’m extremely excited for this new title. It’s a huge departure from their usual style of games. I’m eager to see how this game turns out.

About the Game:
Sakuna: Of Rice and Ruin represents a whole new direction for this acclaimed developer, combining side-scrolling action with deep crafting and farming simulation. Players take on the role of Sakuna, a proud yet lonely harvest goddess who is banished to a dangerous island with a group of outcast humans. As she tames the island by defeating demons in gorgeous, mysterious natural settings, she will also find a home in a mountain village, proving herself worthy of her title by harvesting rice and bettering the lives of humans. In addition to serving as a love letter to Japanese mythology, Sakuna: Of Rice and Ruin is an ode to the artistry of cultivating rice, and an engrossing simulation of the craft behind the agriculture.

• Refined Side-scrolling Platform Action
Sakuna uses farm implements as weapons, chaining together strong, weak, and special attacks to take down animal demons, and combines this with her “celestial scarf”: a magical item that allows her to grapple distant platforms and enemies.

• Detailed 3D Simulation-style Gameplay
The village serves as a base of operations for crafting weapons, cooking food, and farming rice by following detailed steps from planting to harvesting across the seasons, improving the eventual harvest and honing Sakuna’s battle skills.

•Stunning Environments and Enemies Inspired by Japanese Legend
A painstakingly researched story incorporating Japanese history and legend sees its heroine face off against numerous types of demons, great and small, as she traverses detailed landscapes rich with the iconography of classic Japanese myths and legends.

•A Moving Story about Finding One’s Place
Through her life in the village, Sakuna will learn more and more about her human companions and, hopefully, help find ways to heal their souls. 天穂のサクナヒメ 羽衣 PS4『天穂のサクナヒメ』ティザートレーラー(BitSummit2018) Sakuna: Of Rice and Ruin – E3 2018 Trailer