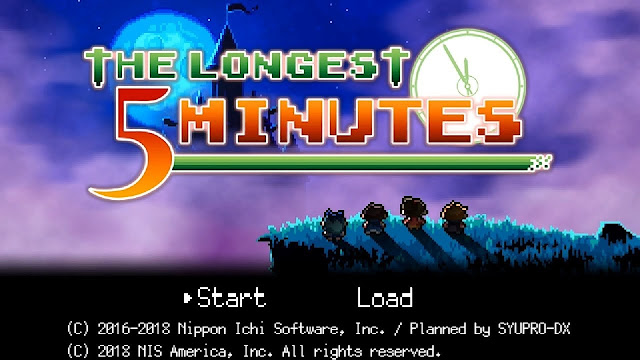 Publisher: NIS America
Developer: Nippon Ichi Software
Platforms: Nintendo Switch/Steam
(Copy provided by publisher)
[Don’t worry. We aren’t all of the sudden doing just written reviews. We simply couldn’t capture video from the system and using the capture card we have on the Switch was a pain in the ass. Moving on.]

I’ve come to think that the Switch is a system that is good for all sorts of games. One of which being portable RPGs. So when I see one crop up, especially a JRPG, I’m usually pretty intrigued. Tack on the fact that it’s from NIS, and you have my attention. NIS has published and produced some of the strangest and off the wall RPGs I’ve seen in my life. For those who may not know, their Disgaea series is my favorite JRPG serious bar none (yes, including Disgaea 5 despite the hard time I gave it). So I was pretty ready to review The Longest 5 Minutes, a game that flew under my radar. Thanks to Michael though, I was able to give this game a look and…hm…well, let’s just dive into the good then the bad.

Upon first glance, it can be seen that the game has decided to adopt a more 16 bit art style. The colors are vibrant, the sprites are well done and expressive, and the large models look great. The enemies in particular look amazing in this style due in large part of how…odd they are. I’m talking demonic wine barrels, evil gorillas, a pile of gold that smiles devilishly at you, an evil slot machine girl…I could go on. Point is, the game’s visuals look slick and pleasing to the eye. The main character designs are…well, typical. Still, they look good. Along with the great visuals comes a pretty nice soundtrack. Whether it was something toe-tapping or mood setting, the music in this game couldn’t be ignored. It helped with tense moments that would otherwise just be blander than usual. 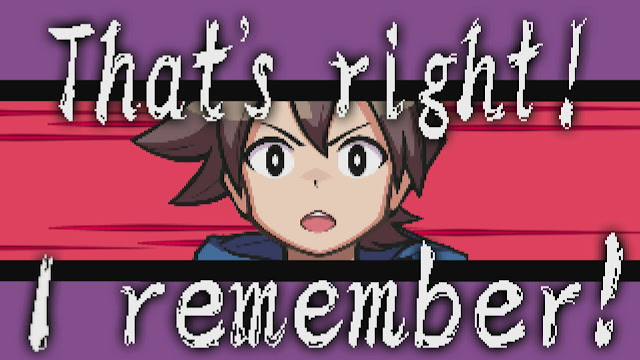 This is all backed by something more important: good dialogue and writing. The story itself is nothing to write home about. You play as the hero, Flash Back. Yes, that is an intended pun. With your band of heroes, you are on a quest. That quest? Well, you don’t quite remember. You start the story at the end of it, facing the Demon King. You don’t remember why you’re there, how you got there, or what to do. You are just there, and the objective of the game is to find out why you were sent on this quest and how you lost your memory within the span of five minutes. The longest five minutes, in fact. The premise is nice, but the story itself of the hows and whys are…meh.

What carries the story along is the writing. The main cast and the NPCs make you want to listen to every single person you come across, just to see what they say. They’re a joy to read, and you will be reading a lot as this game has no voice acting. But the highlights of this game go to the condescending and often too curious Demon King. You can almost forget that he’s evil, until he reminds you with clever wit and such subtle mockery. It kept me invested in a game where I may have lost interest sooner. How you ask? Well… 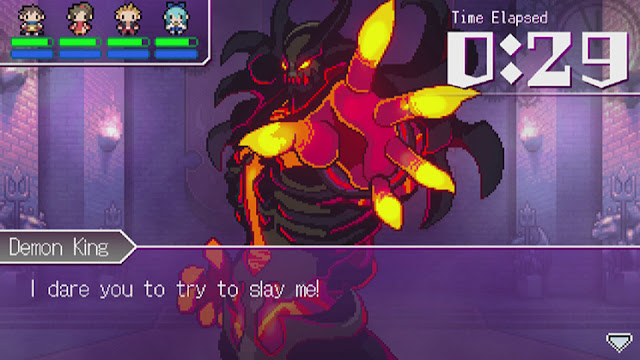 The combat is simple. Like REALLY simple. Enemies are random and you have the options of attacking, using magic of varying kinds, or defending. The battles are first person and usually pretty fast. Worst of all, they’re mind numbingly easy. Often, I found myself mashing the attack functions and winning with ease. I’m not sure stats really matter, but if they do then we must always be above the level. Which, by the way, is another problem I have. See, the leveling in this game applies to the party, not the characters. Which, is inoffensive, but seems to add to how easy this game is. Leveling ultimately doesn’t matter for much. You’ll do it regardless so long as you go through the story. At the end of each mission, you’ll gain experience for doing said mission with bonus XP added if you completed the side objectives as well. Whether or not this affects the final battle when it concludes is unknown to me. I was able to finish the game just fine doing the bare minimal.

Another incredibly odd decision is the transition from level to level. At first, I thought it was some sort of glitch or something, but at the beginning of each new segment your gold and equipment is predetermined. Your items (including consumables you may have bought in the previous segment) do not carry over and are replaced with whatever the game decided to give you. That has to be the worst design choice I’ve ever seen in a RPG! It ruins progression and devalues gold and items. Sure, you can use the gold for consumables in that segment, but that’s it. As for equipment, they weren’t worth buying since the best of what you can buy is easily found by walking around and exploring the dungeons. Once you figure that out, the game loses the sense of being able to play how you choose; not that such a way to play existed. 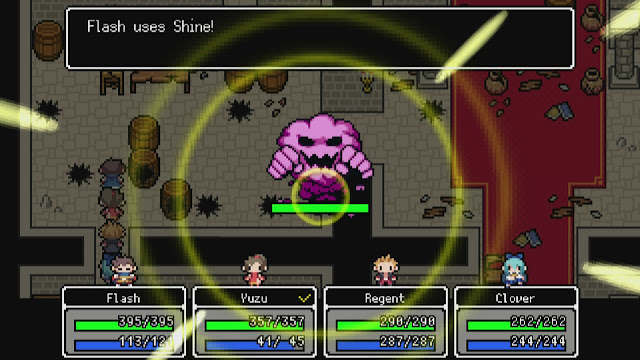 Since you play the same 4 characters, you play the same 4 ways for the majority of the game; well rounded character, hard hitter, black magic user, and healer. Every few levels, you can mix it up with a character present only in that particular level, but for the most part it’ll be the same 4 characters. Which would be fine, if the combat were at all engaging or meaningful. Why grind when you get all the experience you need? It makes fights feel tedious. Only once did I have to think my way out of a fight. Once. And no, it wasn’t the final boss. To add to that, moves are given to you with no indication. I’ll give it that the new moves show some sort of “progression”, but not much. But not getting some notification when a character learned a new move seems like a nitpick compared to the game’s other problems.

Finally, I’d like to point this bit out. Nothing major, but mind boggling. Given the game’s graphical nature, one would think it’d run pretty smoothly. Yet, I came across 2 crashes on the Switch. I…don’t know why, but yeah. Two times, it crashed. Just something to look out for. Thankfully, it saves often and you can save however you like. Autosave, manual save wherever, or suspend save.

To wrap this up, the game isn’t horrible. It just takes some odd missteps that keep it from being charming or engaging. However, it’s a well written tale that should be experienced at a discount. From what I’ve seen, it retails for about $40, and I honestly think that’s pretty steep. The game isn’t that long and is far too simple to warrant that. Maybe $20 at the absolute most.