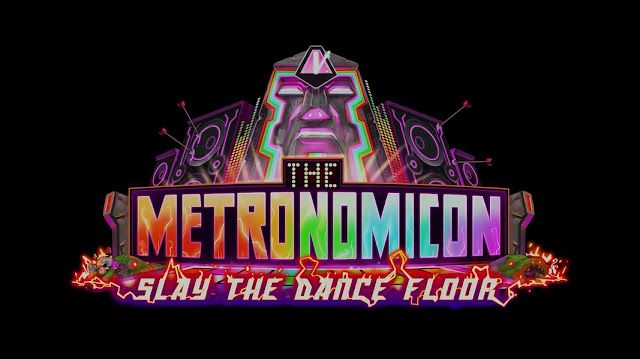 This new turn based RPG/Rhythm game hybrid The Metronomicon: Slay the Dance Floor comes from the minds of  indie studio Akupara Games. This mix of genre is very intriguing to say the least. I don’t think this is the first of its kind however, it might be one of the better ones of this genre mash-up. The soundtrack sounds pretty incredible from the trailer.

Save the World from Magical Party Crashers– Packing in a full-fledged story mode with a colorful cast of musically-empowered heroes and villains, The Metronomicon sees you take control a party of eight new masters of the “rhythmic combat arts” to wage musical warfare against a multitude of dance-mongering fiends. Control up to four concurrent heroes as they cast powerful spells, buff their teammates, and beat down their enemies with a variety of magical loot and groovin’ dance moves. The effectiveness of your team is all in the rhythm, so put on your dancing pants, light up dad’s disco ball, and prepare your body for The Metronomicon. Oh, and did I mention couch co-op? Because nothing’s better than an armored dance partner.

Power Up Your Dancing, Moves, and Gear– Would you like a side of RPG to your rhythm game? Too bad, because you’re getting TWO MAIN COURSES. Hunt for epic loot, unlock new stylin’ dance spells, and recruit new heroes to join your party. Tank, heal, buff, and dish out the damage in real-time musical combat to conquer your foes.

Check Out My Mixtape The Metronomicon features a fantastic, ear-blistering soundtrack featuring some of the hottest electronic, synthwave, chiptune and indie artists, including an exclusive track from Jimmy Urine of Mindless Self Indulgence, an unreleased track from Shiny Toy Guns, along with tracks from YACHT, Perturbator, J-Punch, Dj CUTMAN, and many, many more. We’re also always adding new music, so the party never ends!

Play Until Your Ears Turn Pointy– Game modes you ask? We got: Story, Arena, Freeplay and Daily Challenges. But wait, there’s more… But, you’ve gotta discover those yourself.