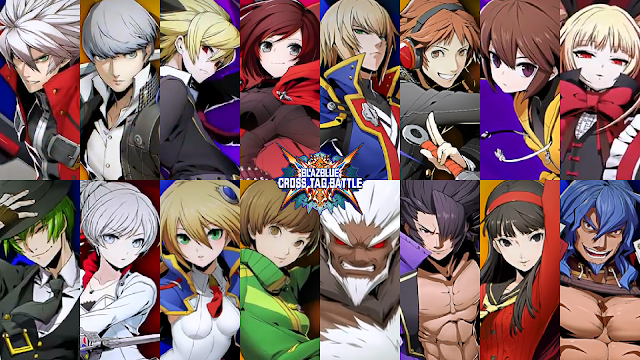 Guess who works across the street from a GameStop with the BlazBlue Cross Tag Battle demo? Guess who’s gone to that very GameStop almost every day he’s had to work in order to keep playing? That’s right. This guy. I’ve played that game for more hours than I care to admit, getting used to the controls, getting a feel for the game, and generally studying it to see if my early fears were founded.

The demo came with most of the cast, the most obvious omission being Chie. Which was a shame because while I HATE her, she was my main in Persona 4 Arena and I wanted to see how well she played. Still, of the roster I remembered, the rest were there. No DLC characters or anything. I’m gonna go over visuals, audio, and gameplay in that order and hopefully you’ll see if this game is for you. Okay? Alright. 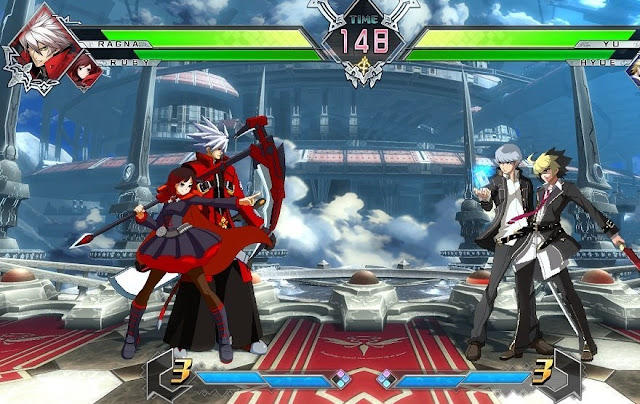 Visuals are first because it’s the easiest to talk about. Hit effects and special moves look as good as they always have and the handrawn look is still as nice as it always has been. The franchises come together nice visually, though looking at it really close, it seemed that the art style was normalized across the board. So the BlazBlue sprites don’t look as good as they did in BlazBlue Central Fiction, but they don’t look terrible. Just PS3-ish. Considering this is also coming out for the underpowered Switch, I’m not surprised. Backgrounds look as great as they always did, the Persona ones being my favorite. All in all, it’s a good looking game. I only wish that the meters down at the bottom weren’t placed in the middle, but it’s a minor gripe.

Audio is a little more difficult. The music, if you liked these tracks in their respective franchises, is perfectly fine. Doesn’t have some of my favorite tracks, but fine. The more important part is the English VA for the Under Night cast. Some of it lands…some of it doesn’t. Gordeau was one I took a bit of exception with since he doesn’t say “GRIM REAPER” nearly as strongly as he does in his Japanese voice. And Waldstein…hm. He took some getting used to. That said, the majority of the English VA track is good. Hyde sounds like how I think he should, Linne is probably the best casted next to Es, and Gordeau is fine…mostly. 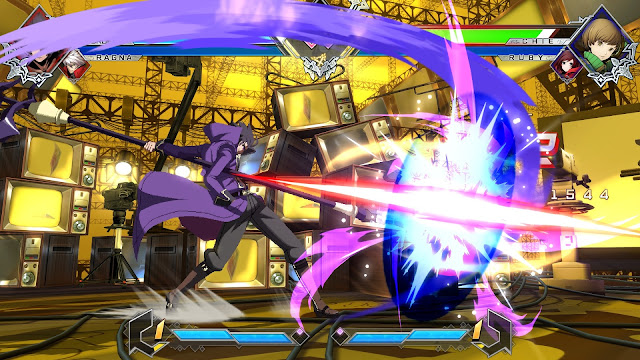 Alright. That aesthetic stuff is out the way. Let’s talk about that gameplay. It’s fun. Really fun. But it didn’t do away with something I’ve had a problem with since I saw match footage. Though, given how this game plays, that’s probably for the better. See, my biggest worry was that matches would go by super fast because the time to kill was so quick. However, the game is so simple that perhaps it SHOULD be going by this fast. It’s about as simple as DragonBall FighterZ, but half as intrusive or long.

The controls are about as basic as controls to get: light attack, heavy attack, resonance button (universal overhead button), and tag. Calling an assist is a shoulder button command, as is grab. Assists recover quickly, but take meter to use. Each assist has 3 attacks depending on the direction pushed when you call the assist. Grabs are kind of pointless here, only really used for interruption as you don’t get much mileage for landing one. So it comes down to the combos.

Since the controls are simplified so that every character “fits in”, some design choices have been made that I…initially didn’t agree with. Gordeau’s Grim Reaper being a quarter circle motion move (236 for the anime crowd) was…hm. Tager’s grab? Kinda dumb. Narukami’s air normal being one of his best moves for getting in? Move allocation is something I question, but for the most part is works out fine. Though, now I have new worries walking away from this demo. 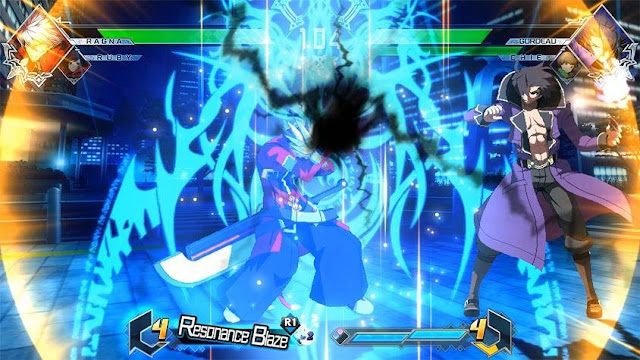 Since this game is so simple, what will keep players playing? It doesn’t seem as though there is a whole lot to discover. Perhaps combinations of assists for setups and finding all the combo routes will keep it alive for a while. Plus, the rounds being so short could help stave off that feeling of fatigue and boringness. It did keep me playing because the rounds were so short, I wanted to just jump back in.

Finally, DO NOT go into this thinking what you use to do works as well as it used to. Don’t let that v-13 footage fool you. Just because you’ve seen it before, doesn’t mean it works as before. A lot of moves and combos I was trying from prior games just don’t work and will probably follow the usual “anime fighting game” combo route of A, B, (normal that causes a juggle), jump cancel into AAB, jump again into AAB, end with special move or something. It has the potential to move past that, but we would need a proper training mode to really dig in. I was stuck playing dumb AI so I only got so much of an impression when trying to dig into this game.

All in all, this won’t be a bad game, but this won’t be the deep game people may expect. This is going to be in the pile of anime games that’s good for people who have never played anime games before. Simple controls, simple moves and execution, and fast enough where it doesn’t get too frustrating. But have you all had the chance to try the game out for yourself? What did you think? Do you have your own fears? Did I miss anything you noticed? Let us know in the comments.