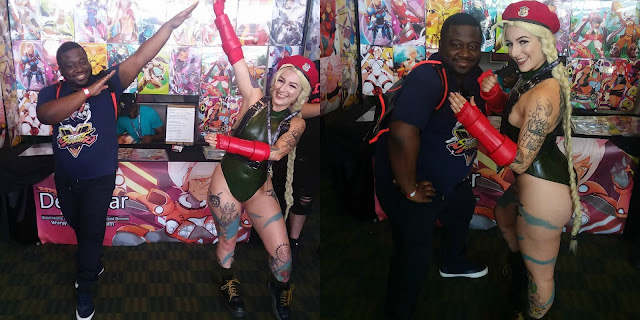 I’ve been fortunate enough to be able to travel and attend fighting game tournaments for the past two years. I used to be an avid Con-goer (Convention Attendee). I would also shell out money for C2E2 and Anime Central year after year. After a while, I found myself having less and less of a good time. Even at the peak of my anime viewing and comic book reading, those conventions seemed less and less fun for me over time. I always found myself generally bored. Anthony and I would normally just find all our friends in the gaming rooms. I had no interests in panels and I wasn’t in the mood to stand in line for hours just get an autograph from a voice actor or celebrity I loved. But one thing I genuinely loved was seeing cosplayers at conventions. Taking photos with amazing cosplays was always a highlight of my convention experience. C2E2 has just become an excuse to go to the Crown Championships of Cosplay. I even cosplayed at a few conventions. But I soon realized that shelling out money just to see cosplayers was not enough.

My experiences with Fighting Game Tournaments have changed over the years. My first tournament I attended was Frosty Faustings in 2014. It wasn’t the best experience. It was just a room with people who already knew each other playing fighting games. At that point, if tournaments were like this, I would probably never attend another event. Two years later, I made the decision to opted not to attend Anime Central in favor of going to Combo Breaker in St. Charles, IL. The experience I had at Combo Breaker was life changing.

After attending Combo Breaker in 2016, I saw that Fighting Game Tournament were just fighting game conventions in a nutshell. There were exhibitors, dealers room, artists alley, panels, cosplayers, game rooms and the tournament floor. There was always something to do and see. After my experience, I was inspired to try and attend as many events as I could. I attended Combo Breaker the following year and managed to go to Evo as well.

When I attended Evo 2017, I had gone by myself. I had a few goals I wanted to accomplish. There were quite a few game developers showing off games. I wanted to meet Yoshi Ono and get a picture with him. I also wanted to finally meet one of my favorite cosplayers Linda ‘VampyBitMe’ Le. Unfortunately, she can’t attend many events in the Midwest due to her busy schedule and high demand so I must travel to one of the bigger events she’s attending. I’m glad I found her in the huge convention hall during Evo. She was tucked away a bit. When I finally found her small table it there were people lined to buy prints and get photos with her.

While I was waiting, she was talking about who was best girl in Persona 5 with everyone. She was very engaging and sweet. She was approachable and quirky too. She was partial to Futaba as best girl. I told her that I had been a fan since Kotaku published that article about her cosplays many years ago. She laughed and said, “OMG that was so long ago, I feel old.” She signed my print of her Jim Lee Psylocke cosplay. We took a photo and she thanked me for coming. After walking away, I couldn’t help but think about other cosplayers I loved. 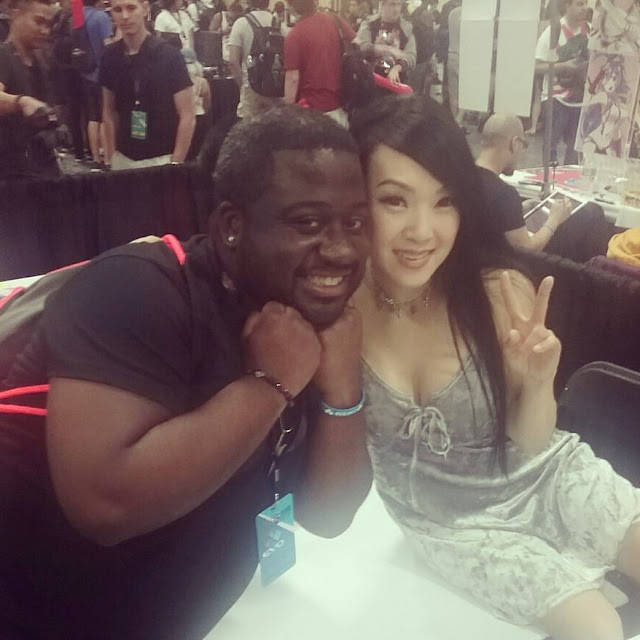 The FGC has a quite a few notable cosplayers who play fighting games and cosplay. Rose Romanova has an extensive list she’s compiled of many cosplayers in the FGC. They do amazing work. But for those who have never attended a fighting game tournament, I urge you to consider coming. These events are considerably cheaper than your typical convention. Hotel accommodations are normally less than $120 per night and Spectator badges are usually less than $20 or free. There aren’t a lot of cosplayers flooding the convention floor so you’ll have maximum exposure when you do wear your cosplay. Also, you’re exposing your work to a new demographic of gamers as well who might not be familiar with your work. With the way fighting games are expanding, there’s so many characters to cosplay more than ever. And your cosplays aren’t relegated to just fighting game characters either.

Now that the FGC is gaining more support from publishers and developers, FGC events are becoming much more than just “guys playing fighting games”. It’s a great networking opportunity for expanding your brand. Often times big names in the gaming industry will attend these tournaments like Ed Boon or Yoshi Ono. But most importantly, they are a fun experience that you can’t get anywhere else. It doesn’t matter if you’re not really good at fighting games or don’t know how to play very well. There’s nothing like an amazing fighting game tournament. So, join us and pick up a controller. Let’s play some games together.