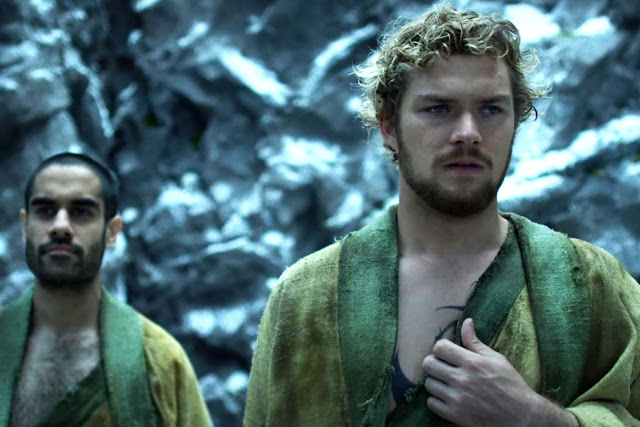 Picture this: it’s March 17, 2017 and the weekend was upon us. As many people did over the weekend, I binged watched Marvel’s Iron Fist; the last of the individual origin stories leading up to the epic team up The Defenders. Despite critics scathing and bias early reviews of the show, I went into the show with optimism and fervor as I had with the first three shows. Unfortunately, the story that was told was less than stellar in execution. And I think that’s putting it nicely.

Danny Bland is really boring
These kind of stories so far have placed a spotlight on lesser known (but important) Marvel superheroes like Jessica Jones, Daredevil (redux) and Luke Cage. Each one of them had personality and charm. Jessica’s sarcastic whit, Luke’s kindhearted bravado and Daredevil’s charisma translated well on screen. Danny Bland unfortunately was about as charming as a dried up potato. His personality was so one-dimensional and stagnant that it made for very boring and cringe-worthy dialogue. Even if he lived in a monastery all his life, I found Shen from Wendy Wu’s Homecoming Warrior to be far more likable than Danny. Even his fellow K’un-Lun bestie Davos had more personality in his gruff exterior. We can either attribute this to the lackluster writing or Finn Jones’ paper thin on-screen performance. Nevertheless, Danny Bland was not the star of his own show.

The corporate melodrama was distracting
The first three episodes are more or less a drama about corporate politics, legality and office strife. Danny’s quest to regain his family’s business which is worth billions was slow and painful. Watching the Meachum siblings’ daddy issues and power struggles took away from the main focus. The entire first quarter of the season can be summed up as #RichPeopleProblems. Having to suffer through rich people’s tug-o-war of a company that didn’t belong to them in the first place is both asinine and reductive. Even if we are to be subjected to such matters on screen, there should have been interesting characters and dialogue to pull you into the drama and shenanigans. I don’t know where things went wrong in the writing but it was blatant that this particular series suffered a lot.

The Supporting characters stole the show
Just about every single supporting character in the show was miles ahead of Danny in terms of characterization. Colleen Wing was essentially one of the well-developed characters in the show aside from the returning veterans. Colleen’s internal struggle, moral dilemma and budding love for Danny was intriguing. Her personal narrative was definitely a highlight. It brought to mind Knives Chau from Scott Pilgrim vs The World. Even though she wasn’t the star of the show, she still managed to be a fully realized character.
It goes without saying that Claire Temple (Night Nurse) portrayed by the incomparable Rosario Dawson was a scene stealer. Claire’s moxie, tenacity and mettle coupled with her charming personality was a much needed addition to the show’s lukewarm cast. Claire’s plotlines that ran deep from both Luke Cage and Daredevil were plastered all over Iron Fist. Her previous encounters with the Hand and other enhanced heroes allow for her to say the things that we the viewers were thinking the whole time. No matter how absurd her DIY surgery miracles got, we as the viewer still believed in her abilities. Rosario was a delight and much needed to get through this entire season. I would also like to highlight Jeri Hogarth who was also a delicious treat. In Jessica Jones, Jeri Hogarth was a scrupulous and bitchy character that was never without a witty retort. Carrie-Anne Moss delivered that same New York power lesbian lawyer to this show. I wished she was introduced a lot sooner during the first three episodes. You know when they were doing all the legal beagle stuff.

The Fight scenes were lackluster
For a show based around a character who is supposed to be one of the greatest martial artist in the Marvel Universe, we sure didn’t get any memorable fight sequences. The fighting in this show was a huge letdown. I could have excused his bland character if he shined in the fight sequences. I was expecting epic and intricate fight sequences that would eclipse all the previous shows. He is the Iron Fist and he fought like the Aluminum Handful. Seeing Danny get beat up by regular henchmen and untrained foot solders was an insult to my intelligence. Danny Bland was able to best a dragon to gain the power of the Iron Fist yet a couple henchmen gave him so much trouble. I was turned off by Finn Jones’ execution in the scenes too. He looked like he had just learned how to fight a few days before shooting. Nothing about his movements, stances and attacks had any intensity behind them. It was like watching an episode of Power Rangers.
The Hand also were lackluster in this series. Daredevil had problems taking on one ninja from the Hand and in Iron Fist, they seemed less lethal. A still-in-training Claire and an inexperienced Colleen were able to best them easily. Probably the worst offense of this was the final showdown between Danny and Harold Meachum. I could not fathom why Danny was struggling to defeat Harold. Even if he was shot in the hand, Harold had very limited training in martial arts so even with an injury, Danny should have been able to take him out without any trouble. The only highlight in terms of fight choreography was Lewis Tan’s masterful portrayal of the lethal Zhou Cheng. It was clear just from that fight sequence that Lewis should have been hired to choreograph all the fight sequences in the show at the very least (or you know casted him as Iron Fist.) His drunken boxing was mesmerizing and left me wanting more.

Colleen and Danny had no on-screen chemistry
I didn’t feel any sexual tension or chemistry between them. On-screen it was lacking. Their “supposed” love affair looked awkward and forced. Their “love scene” was not very good in any sense. I don’t know what the intention behind that scene was but showing any kind of intimacy on-screen lends itself to the idea that the two would be enthralled in a passionate sex sequence. I’ve seen better sex scenes on The CW.

There’s no clear or distinct villain
Trying to figure out who the villain was in the series made for a very confusing experience. Was it the Meachums blocking Danny from his family company? Was it old Madame Gao? Was it Kabuto? I think the real villains were the writers of this show. The consistent team switching and alliance shifting made my head spin. The problem that arose was the switching wasn’t clever. It was the very generic “We side with those who help us reach our goals” shtick and it happened so often and out of the blue that it lost its effect after the second time it happened. None of the supposed villains had any real impact on the story aside from their assigned reveals to push the story. Madame Gao seemed to be the only villain with any real intention. Her goals were laid out from the start and she remained a crazy old lady till the very end. I think one of the reasons that made the plot and overall story suffer was due to its overinflated villain roster.

Ultimately, Iron Fist fell flat. To give this show another season over Luke Cage or Jessica Jones would be criminal. This show felt like a filler show while the popular shows were in between seasons. Hopefully with the combined awesomeness of the other three Defenders, Danny won’t feel so bland. Maybe he needs to be around such colorful and diverse characters that can help develop his character more.  Three out of four great shows isn’t bad. Despite this mediocre finish, I think the Defenders will be an amazing show once it airs. Until then, let’s never speak of Iron Fist again.