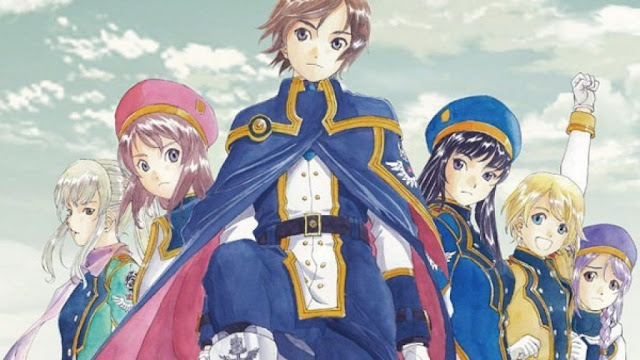 I was very excited about this game because of the premise and gameplay. The game contains key staff from Bandai Namco‘s Tales series of video games, including character designer Kosuke Fujishima, and scenario writer Takumi Miyajima. Also, a previous game that Compile Heart had produced, Omega Quintet was interesting and unique. It had a lot of personality and gusto. Unfortunately my expectations were not met. Dark Rose Valkyrie, while it made some improvements over Omega Quintet, its a really lackluster experience.

Black Rose Valkyrie is set in an alternative  timeline of 1929 Japan where a virus has spread through the population from a fallen meteorite called Black Garnet. The virus turns people into monsters called Chimera. You play as a rookie captain of the Anti-Chimera Interception Division named Asahi who leads a group of Valkyrie users, high-tech weapons to combat Chimera. Known as Special Force Valkyrie, they are tasked with stopping the spread of the virus and eradicating the Chimera.

The story is very typical and it doesn’t present this premise in a unique or fun way. The characters are bland and paper thin. Also, the virus doesn’t affect women as much as men so this feels Iike a cheesy way to justify a harem style game. The game has this grave problem but there is no urgency. The game uses a Visual Novel style aesthetic for dialog and conversations. The writing in the game is very drab and boring. Conversations lack personality and this game is very text heavy.

The combat is decent but its plagued with a cumbersome and clunky interface. There’s a simple combo system that you preprogram strings with additional special attacks, support attacks from the reserve members. There’s a lot of attacks to tweak and manage. It can be overwhelming as you have 8 characters from the beginning to manage. Leveling up can be a task as well. You have to choose which stats to upgrade. By upgrading certain slots you gain new attacks. This amount of micromanaging is exhausting. You still have to manage inventory, your uniform which needs upgrading and maintenance as you keep fighting.

The visuals of the game are very washed out. Its sterile and uninteresting. The presentation of the game is not good. Compile Heart games are normally vibrant and have great art direction but I think this game missed the mark. The character design for the 2D sprites are great but everything else falls short. The environments, monsters and effects aren’t  visually stimulating.

Music and voice acting was less satisfying. There’s not much going on in the game that’s worthwhile.

Overall, I was disappointed by this game. I feel like it was a let down and has very little going for it. Having Tales series staff on the team did nothing to help this game. It has very little attributes that are redeeming. If you’re looking for a great RPG experience, you might want to get something else altogether. At present, there are numerous JRPGs on the market that are more satisfying than Dark Rose Valkyrie. I suggest waiting to pick this up unless you’re in a desperate need for a new RPG and you’ve already finished all the games you have currently.