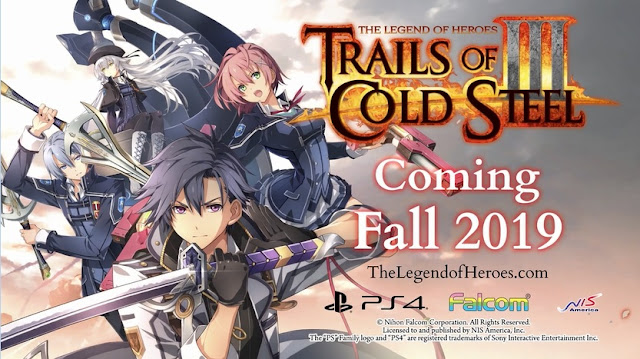 At long last, we have the news many Falcom fans in the west have anxiously awaited. The Legend of Heroes: Trails of Cold Steel III will impact the west this fall on the Playstation 4. It’s confirmed that NIS America will be handling the localization of this game. I have mixed emotions about this because XSEED did a tremendous job localizing the first two installments years ago. And NIS America had some trouble with the localization of YS VIII Lacrimosa of Dana. They even had to release a patch update to address the poor translation of the game. However, it sounds like Sean Chiplock will be reprising his beloved role of our favorite main protagonist Rean Schwarzer. Hopefully the rest of cast are returning for this newest installment. It will be interesting to see how NIS America handles this huge project. Take a look at the announcement trailer below:

Press release
“Meet a new Class VII led by the “Ashen Chevalier” Rean Schwarzer, now a newly minted instructor at Thors Branch Campus. The epic story continues as the cast travels the Empire’s recently acquired lands, only to find themselves ensnared in a devious plot that could plunge them into another war, or an even bigger calamity. New features, such as the “Break System,” bring greater possibilities to combat, while familiar faces of friend and foe make their appearance!