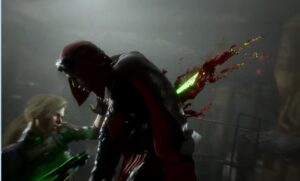 Netherrealm Studios released their brand new Story trailer for Mortal Kombat 11 which contains some important not-yet-revealed characters. Given that there has been a lot of leaks lately, it makes sense to get ahead of the them by leaking them officially. The trailer shows our newest villain Kronika as she assembles a gallery of rogues to do her bidding as she causes a Temporal Armageddon which would erase all of existence. Time is completely screwed up and its up to our merry band of misfits to take down Kronika and restore time back to normal. In the trailer we get some footage of Cassie Cage, Jacqui Briggs, Eron Black and possibly a tease of Jax. Take a look at the epic trailer below:

Watch the official story trailer for Mortal Kombat 11. MK11 releases on April 23 for PS4, Xbox One, Switch and PC.