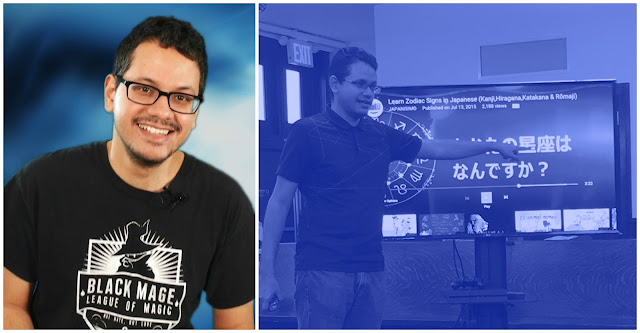 Yosenex Orengo, avid Gamer and Linguistics aficionado works as a Senior Librarian at the Brooklyn Public Library in his neighborhood of Brooklyn, NY. His scope is young adults or “millenials.” Yosenex saw that Anime, video games and manga allowed teenagers at the library to be exposed to Japanese culture and language daily. “It was pretty easy to encourage them to attend my classes by linking the Japanese language to other interests they already had,” he says. Yosenex himself used the library when he was teen to learn Japanese. “I used to watch Let’s Learn Japanese shows on public access television,” Orengo says, “Eventually I became fascinated with Anime, particularly Sailor Moon.” (BPL, 2018)

After graduating from Hunter College, he moved to Japan’s Saitama Prefecture right outside of Tokyo. He taught English to high school students through the JET program. He later returned to the states and pursued his library degree. Also, he continued to hone his Japanese language skills for years to come. Eventually, Yosenex would come full circle becoming a librarian in the same neighborhood he grew up in. The Stone Avenue Library in Brooklyn had a program called Teen Tech Time which allowed teens in the neighborhood to play video games at the library. Yosenex saw that he could use his experience and expertise in Japanese video games and language to teach parts of the culture to them. Soon, he was able to develop a program called Library of Gamers. I had a chance to chat with Yosenex about this program and how he’s making a positive impact in his own community:

MM: How did you come up with idea?
YO: The concept for my Library of Gamers Program began after we started having tournaments at our library. At first we had simple tournaments for games like Smash Bros and Tekken 7. Eventually, we took it a step further by having our tournaments streamed online.

MM: How did you pitch this to the Library?
YO: I wrote a detailed proposal following BPLs Incubator Project guidelines. One of the key points I highlighted is that Library of Gamers (LoG) would be an evolution of Teen Tech Time, using some of the resources we already have in-house.

MM: What were some of the challenges you faced when you were developing this program?
YO: Some people oppose the idea of gaming at the library and would prefer to have teens reading more. Unfortunately, reading programs do not attract teens as much as tech based ones do.


MM: How many students do you have in your program?
YO: On average our Teen Tech Time gets anywhere from 15-20 teens. On Fridays we often have 25 teens across two consoles, the PS4 and Nintendo Switch.

MM: How has the program grown since its early stages?
YO: Teen Tech Time has grown significantly at my Branch which is Stone Avenue. We have more than doubled our attendance, and initially began with just one TV set up. Now we have up to three TVs with games set up at once.


MM: What’s the most rewarding part of having this program?
YO: As a gamer, it’s amazing that I can use my passion for video games in a professional setting. Also, many of the teens see me as a mentor, and will often ask me about games from earlier generations.

MM: What ways do you think this program has helped your community?
YO: Teen Tech Time has allowed provided a safe space for teens to express their passion for gaming. While many of the games we play are competitive in nature, we have created a family with our teens here.

MM: How can someone get involved with the program?
YO: I always welcome spectators for our events, and am open to suggestions and feedback for our public facing events such as our tournament.

MM: Do you have plans to expand this program to more Libraries in Brooklyn and even New York?
YO: With Library of Gamers, if the program is successful, I can imagine it being replicated throughout Brooklyn Public Library. We have about 60 branches in our system.

For more information about BPL, visit their website here. Also, if you’d like to help start a program like this at the Brooklyn Library, their BKLYN Incubator initiative gives industry professionals the resources and opportunities to develop specialized programs from the ground up tailored to help build and empower the community. You can keep up with Yosenex on Facebook and catch the latest episode of his untitled gaming show. Yosenex