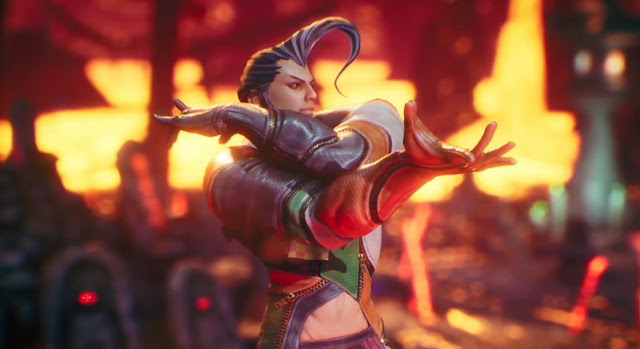 The patch is here! After the initial announcement at Evo 2018 and a livestream a week ago, Arika released the long awaited 1.1.0 patch for Fighting EX Layer. Not only would the patch add Pullum Purna and Volcano Rosso with new stages to the roster, there’s a sizable list of mechanical and system wide changes made to the game. You can check out the extensive list of changes below:

▼Changes to Gameplay engine:
-Invincibility was added to the recovery period after Teching a Throw.
-The Corner system was fixed.
-The range on Cross-ups was fixed.
-Fixed an issue where Easy Combos would come out after inputting Command Normals from a Dash. -Fixed an issue where CPU opponents could block moves on landing that they should not have been able to block.

Gougi adjustments:
-Aggro -Desperation -Meter Power -Heads or Tails -EX Arrow
-The makeup of the Babel was changed.
-Fixed an issue where Hard Attack (Guard Break) was not being affected by the Gougi [Critical].
-Fixed an issue where the effect of Critical would reset the moment a Command Throw was used.
-The effect of Disrupt was fixed so [Throws are not affected by increases to Attack Power. They will only consume 1 bar of Super Meter.]

Special Moves:
Shirase, Hokuto
– The move [Shin] had its invincibility time altered and it is now Throwable.

Garuda
– Kienbu’s hitbox has been adjusted. Fixed an issue where Garuda’s [KIENBU] would slow down when moving forward.

Blaire
-MP, MK, HP, HK all had their damage adjusted.
-crHP was adjusted on hit.
– [Sliding Arrow] will now work on opponents who have Hades activated.

Sanane
-Along with the new changes to the corner system, [Kasumi-Oroshi] has been adjusted.
– [YAYOI TOUGONGI] was difficult to see on some stages, so the shading has been fixed.

▼Known Bug Fixes
-Fixes to 1-Bar Connections: As a test in Ver1.1.0, 1-Bar Connections will be able to match with others and appear on search results so long as they meet their opponent’s search criteria.

-Fixed an issue in Training Mode where setting a CPU opponent without meter to perform a reversal Super Combo would cause them to perform the action the moment they built up enough meter.

-Fixed a rare issue where players would proceed to the game even after receiving a time-out error in an Online Match.

-Fixed an issue where the cursor would disappear from the Option menu in Training Mode.

-Fixed an issue where the tabs would go dark in the Option menu in Training Mode.

-Fixed an issue where holding down a button and closing the Pause menu would make that button not work in game.

-Fixed an issue where holding down a button and closing the Pause menu would make it so that button would register as being pressed.

-Fixed an issue where accepting a Casual Match invitation from the Expert Mode ending screen would cause you Matching Status to disappear on returning to the Main Menu.

-Fixed an issue where the Sound Effects would repeat upon building a bar of Super Meter.

-Fixed an issue where the playback wouldn’t be centered when changing the Character Voice volume in the Options menu.