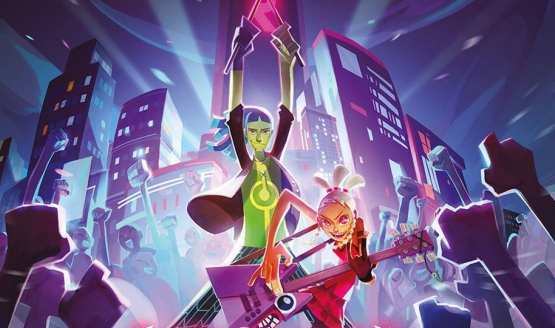 Malaysian studio Metronomik founded by Final Fantasy XV Lead Designer Wan Hazmer is debuting their upcoming project No Straight Roads: “an action game that is based on rhythm, but it’s not a rhythm game.” Music will be the cornerstone and focal point of this game’s mechanics and visual presentation. You take control of indie rock misfits Zeke and Mayday as they try to thwart the plans of an evil EDM conglomerate No Straight Roads. You’ll use the power of music to fight back against the odds. The game features a very unique and interesting art direction similar to El Shaddai: Ascension of the Metatron. With music being the central element, the game’s soundtrack has to be incredible. No Straight Roads will be available on Playstation 4 and Steam this Spring. In the meantime, you can check out their teaser trailer and vlog below: 《No Straight Roads》集合前《FF 15》與《SF 5》製作人員所研發的搶眼音樂動作遊戲 【TGS 2018 試玩】

You are cordially invited to join Yinu, the Golden Maestro, for a session of emotive melodies! Two indie rockers against a massive EDM record label. Join the action-packed music rebellion for the PS4 and PC!