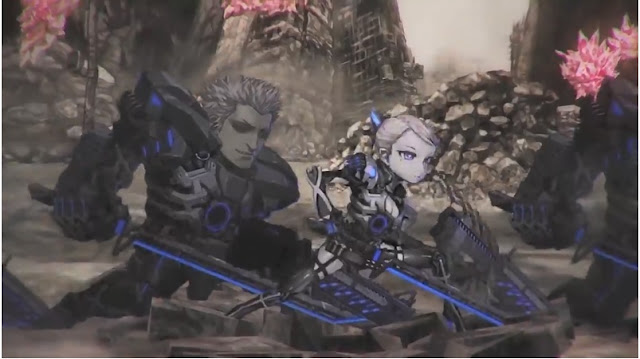 I may have been living under a rock because I never knew this game existed. From the mind of Kuroki Takeshi (oneoreight Studios) comes the epic 2D side scrolling action of Earth’s Dawn. This will be the studios very first game since launching in 2012. Mr. Kuroki made a lengthy post on the official PlaystationBlog detailing the development of the game, the art style and much more.

The first thing players will notice in our game is the unique, 2D art style. The game takes place in the future when alien invaders known as the E.B.E. have destroyed much of Earth. So we needed the setting to be dark and threatening. This is reflected not only in the game’s atmosphere, but also the look of soldiers, the deadly looking weapons, and of course, the enemies. The gameplay in Earth’s Dawn is fast paced — a mix of shooting and melee attacks so players must learn how make use of gun, sword, and advanced attacks to string together combos. When you add dashing in between your attacks, then you’ll notice the game’s addictive nature. In some battles, players will have their combat skills graded. The more varied and exciting their combat approach, the higher the grade and reward. It’s fun starting with a few slash attacks, knocking the enemy up in the air, jumping into the air with more melee attacks, juggling them in the air with gunshots, and then maybe throw them in-midair to finish a combo. Our dev team is often competing to see who can get the highest number of hits in a combo as we are very competitive!

Heavy customization is one of the main focuses for this title. This game looks similar to Vanillaware‘s artstyle. This is definitely going to be an amazing title. The game will be available digitally on Xbox One, PC and PS4. PS4 fans can get a physical copy of the game when it drops November 1, 2016. Check out the epic trailer below: