Times are definitely changing. We live in a world filled with a lot of uncertainty, strife and unrest. In this brave new world, I never would have imagined that Deadpool 2 would be the near vanguard of representation; specifically intersectional representation across many spectrums. I originally was going to singularly write about the brilliant work of Zazie Beetz as Domino in the film. But I think her work fits into a bigger discussion about how intersectionality is needed in these kind of films. Representing more than just one marginalized group in mainstream films does help to close the gap.

This morning I was watching HuffPost’s recent episode of the Post Show and it brought this topic to the forefront. The latest episode zeroed in on the “romantic representation of queer characters.” The video singled out Deadpool’s character as a lazy and crude attempt to represent Pansexuality. Since Deadpool didn’t have a male love interest, it failed. The video also glossed over the relationship between Nega Sonic Teenage Warhead and her mutant girlfriend Yukio. While his critique had some merit, it lacked intersectionality. It was rooted in a very “white gay male” perspective which of course overlooks the other characters. Unfortunately, this is a major problem in the LGBT+ community as a whole. White gay men are at the helm of all issues concerning queer people. They are the focal point of LGBT+ media. When they aren’t the focus, we get these kind of “think pieces” that rally the troops behind a monolithic idea of queerness from “their” lens.

I wanted to highlight a video from a social influencer Shan Boody (Shannon Teresa Boodram) who talked about colorism and how it relates to Black Panther. In her video she discusses how Black Panther wasn’t made to tell the story of mixed race or lighter skin black people. She also discusses a concept she adopted from Chris Rock. To paraphrase, for a marriage to work you have to know when to be the lead singer and when to be the tambourine player. She likened this to mixed race and lighter skin black people’s relationship to Black Panther. Since the movie was trying to highlight, promote and celebrate dark skin black people, the film’s intention wasn’t to include the fringe population of black people. For this story, those black people need to play the tambourine. I found this particular concept important to this discussion because it’s necessary to intersectionality.

Deadpool 2 was not a film with intents on showcasing and promoting a white pansexual man who happens to be a superhero. If that was the intent, it would have been much more explicit. Let’s be clear, Deadpool 2 pulls no punches when it comes to anything. Nothing is really off the table. There’s no subversive messages or subtext. There’s no need in looking for something that was never promised. That stringent and limited world view is why we get into representation Olympics all too often. For gay (white) men, this was not your film. For Pan/Bisexual men, this was not your film. This was your time to play the tambourine. And that’s okay too. 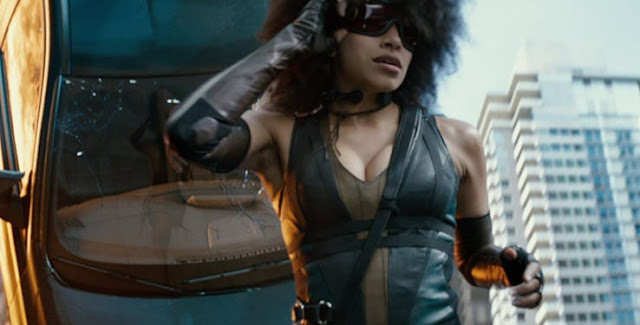 Now let’s discuss who this film was for in terms of representation. We can now circle back to Zazie Beetz’ #BlackGirlMagic as Domino. It has been “speculated” that Domino’s comic book incarnation was a white female. I would assume that it’s expected that she’s a white female. There’s no 100% concrete answer to what Domino’s race actually is in the comic books. I think her racial enigma made the role open for anyone to fill. Typically a white woman would have played Domino. That’s just the route Hollywood tends to go. Thankfully they went against what was expected and casted Atlanta star Zazie Beetz. Her portrayal of Domino was funny, cute, sexy and badass. I love that her character was given range. Often times in these roles, “strong female lead” means she’s a one dimensional character. (See Black Widow from the Marvel Cinematic Universe). This also explores a different character facet for Black women too. She didn’t play up her “blackness” or whatever white version of what blackness is. Domino was unapologetically black without being a caricature of black women. She broke the mold in many ways. Too many black women in films are hardened as a way to convey strength. There’s a difference between being tough and being hard. Zazie was obviously the former. And she was funny. Her comedic timing was spot on. It gave the performance so many colors that’s needed to change the narrative of black women on film. There was a balance made. In a post Black Panther world, we always need quality representation for black women. 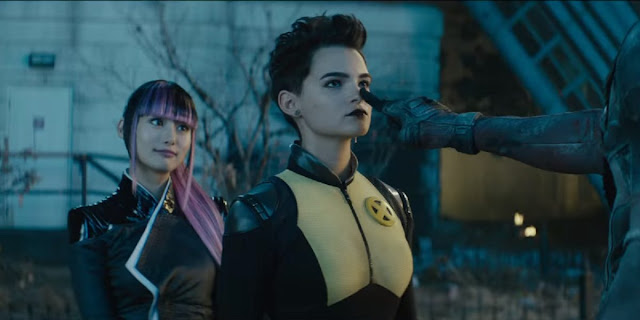 We can’t forget about Nega Sonic Teenage Warhead or just Nega Sonic for short. Her queer identity wasn’t the focus in the first movie. We were introduced to a millennial version of what a teenage superhero would be. Her attitude, style and overall characterization was a sign of the times. I’m glad that her queer identity became a focal point in the second film. Moreover, her girlfriend was a Japanese mutant named Yukio. While we as black people always feel like we are left out when it comes to representation, Asian people have even less than we do in America. The erasure of Asian characters in film has been a longstanding issue in Hollywood. And to find an Asian LGBT character is even harder. While her role in the movie was small, her character is a major step forward. This is definitely a small victory. I would point out that Shatterstar in the comic books is pan/bisexual but his character in the movie didn’t have a chance to show much so we’ll save that conversation for the next film.

While Deadpool being visibly and “performatively” pansexual would have been a great addition to the movie, we can’t overlook what the movie had the offer in terms of representation. The intersection between black women, queer females especially Asian is a definite leap in a right direction. Normalizing sexual minorities on screen is an uphill battle. Changing the depiction of Black women on screen is also a great feat. These strides are all a part of a massive effort to change the institution of film in America. If we work together, we can make big changes. But, sometimes that means you have to take a seat and just watch when it makes sense. Everything isn’t always about you. Don’t be so vain to think otherwise. Divided we fall, but together we stand.  Even if that means shaking a tambourine sometimes.