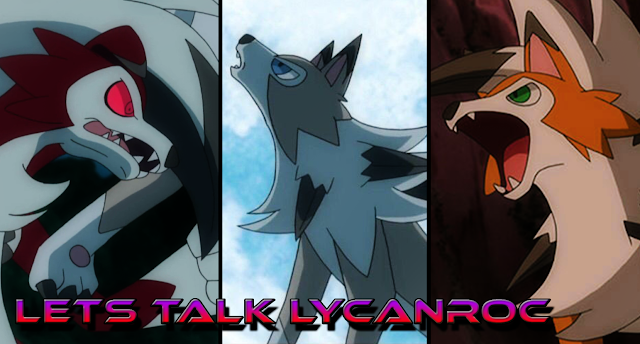 You know what’s a real crime? That I don’t talk more about Pokemon these days. Let’s change that with this latest announcement about…Lycanroc Dusk form…
So here are some things to note before we begin. I loved Sun and Moon, Golisopod is my favorite gen 7 Pokemon, Team Skull is my new favorite bad guy team, and Lycanroc was my biggest disappointment. Now, this isn’t to say Lycanroc is “bad”. It certainly isn’t the best, but look at it. Midnight form is obviously my favorite, but Midday grew on me. As a semi-competitive player, I was pissed that the better of the two forms DIDN’T GET NO GUARD. But, I digress.
However, I never had such a feeling of something severely lacking as I did from Sun and Moon. Perhaps it was its smaller roster of new Pokemon. Perhaps it was the new gym-less format. Perhaps it was the even more dumbed down difficulty. Not really sure. But as I look at my completed Pokedex, I stare at Lycanroc and wonder what could have been done differently. Different stats? A bigger role in the story (after they hyped this thing up to be the new hip thing in Pokemon)? A different design? There are Pokemon I look at and think that it has SO much potential and Lycanroc is at the top of that list. So imagine my surprise when I wake up in the middle of the day to hear from Pokemon Youtubers that Lycanroc gets a new form.
I was excited…only to once again feel that sting of disappointment. 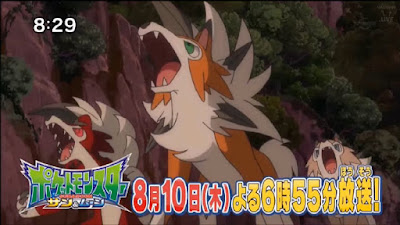 The fuck is that? I was confused. I thought it was some sort of mod someone did of the game until I saw official screens and anime screenshots. This is Lycanroc Dusk form…a cross between Midday and Midnight…BECAUSE OF COURSE IT IS. Now, the hype/hate has died down for the most part, but I’m still confused. Why? Why this? What is this? It’s Midday Lycanroc with Midnight’s hair sort of, colored orange with green eyes, then BAM! Print it. I keep looking at it and wondering if this was a cutting room floor idea they had for Sun and Moon and said “Ah, throw it in Ultra Sun/Moon! They’ll buy it!” And they’re right. I’m still gonna buy it, but what the fuck is this?!
To illustrate the “in between” there are several ways they could have done this. Have it stand on its hind legs like Midnight. Give it Midnight’s fur color or eye color, not lazily slap on Midnight’s hair! I just…ugh… And I get why its orange. I guess it’s to illustrate that it’s “dusk”. Though, I never new that red meant night but I, again, digress. At least from a competitive stand point it’s looking alright. It gets Accelrock and Counter so that’s good. And it’s current known ability is Tough Claws, which for those who don’t know means that it’s contact moves do more damage. 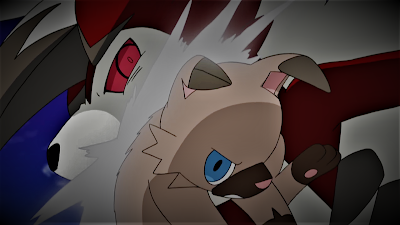 Game Freak is accused of having “run out of ideas” each new generation. Really. A company that came up with a murderous sandcastle, a samurai shellfish, a boxing crab that turns into an abominable snowman, and deadly origami is running out of ideas. No, I think the problem is that they have too many ideas. I can commend them for trying new things each generation, but this time around this…may have been a misstep. They really pushed Lycanroc and made it seem to be a really huge deal while it…wasn’t. Even its biggest draw, having game exclusive forms, was more or less untrue as you could catch a wild version of the Lycanroc you didn’t get to evolve. I’m not really sure why they pushed this thing so hard in Sun and Moon. The only special thing about it is that Professor Kukui has a Rockruff and Olivia, an island Kahuna and Elite Four member, has a Midnight form Lycanroc. That’s it.
So now we have Ultra Sun and Ultra Moon. If I had any hope for this game, it would be to realize Lycanroc’s potential. Make it a subplot to figure out its evolutions. Give an important character one of them. Something. Anything. Something that makes Lycanroc worthwhile. If not that, then give it some stat buffs? Make it great? GIVE DUSK FORM NO GUARD?? Something. I only hope we can see the hype of Lycanroc realized in the next 2 games and not have this wasted potential fall the the floor again. What do you guys think? Like Dusk form? Like Lycanroc at all?
Let’s discuss. And let us know how many Pokemon fans we have. I’d like to make more content than fighting game stuff, after all.

1 thought on “So…Let’s Talk About Lycanroc”