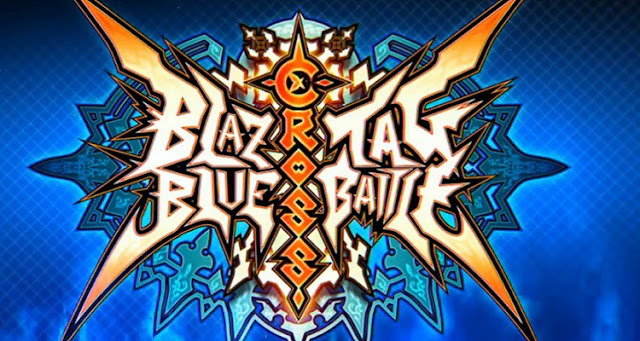 Okay. So after a while of having little to talk about, I think I can come and have a nice discussion with you all after…what two…three weeks? Anywho, Capcom stuff will come later. Just know it’s coming. As well as some DBFZ stuff. But this week, since a trailer dropped this morning I figured why not this?
It isn’t a game I’ve been very vocal about, barring some Facebook posts, but this is a game I’m following closely. More closely than I’m watching DBFZ, if I’m being honest. Today, I want to lay out some concerns, what I love, and what I’m bothered by so far. Okay? Okay.
I’m going to start with what I like first. Mostly, because there’s plenty here and I wanna start on a good note. So the presentation…I mean, look at it. This game, as we should have expected, is a visual marvel. It’s flashy, nicely colored, and the art styles of all the games just seem to work well. Clearly assets were reused, but at least it all seemed to fit. I haven’t looked at gameplay and thought “man, Ragna’s sprite looks way different from Hyde’s or Gordeau’s.” No, the only absurd thing I’ve thought was about how high school children are fighting these monsters. Which leads me to point number 2. The absurdity of this roster. I love it. Never did I think “I wonder who’d win a fight between Ragna and Gordeau for best reaper” or “Tager vs Waldstein seems like a good fight.” Yet, here we are with 2018 fast approaching and that’s exactly what we have. Now, I’ll talk about the roster again in a bit, but conceptually, I love this. Four games mashed together in an anime tag game featuring RWBY who need to be in a good game because their’s sucked. Sorry. Had to get that out.
Finally, I love how they reveal characters. They space it out enough so that we don’t forget the game and always want to see more and they reveal multiple characters at a time. Some tag games aren’t so generous, but ArcSys seems to know how to release trailers. For some games. Each time I see a trailer, I feel like I get a good look at how they’ll function in this game. Which, admittedly, isn’t a whole lot different from how they function in their respective games, but it all looks so cool! 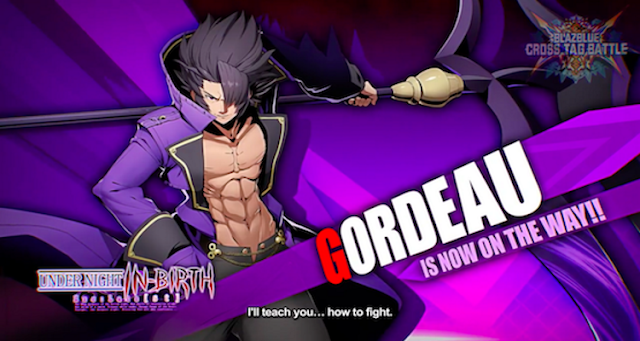 Now, onto some concerns/things that are bothering me. Now, from the gameplay I’ve seen (which is as much as they’ve shown thus far) this game is really high damage. Like, absurdly high. It looks like two or three basic combos can kill a characters. And perhaps that isn’t so bad, but I personally think that if two-three combos kill you in a game, then they should be damn good combos that are difficult to do. That doesn’t seem to be the case here. Also, I can see that some of the health is recoverable. However, the rate of recovery is what I’d like to see. Perhaps that would justify the damage. I’m not too sure since they have yet to show an entire match.
One thing I wondered going into this was how four different gameplay mechanics were going to fit into one game. BlazBlue, Under Night In-Birth, and Persona 4 Arena are so different that I was scared that this could become Capcom Fighting Evolution all over again where they just come in with their gauges and mechanics intact. That would have been horrible, especially for the Persona cast since without their Persona they are much less effective. They seem to have offset this by making the game much more simple…and I mean MUCH more.
I said before that two-three basic combos seem to be able to win a match. Well, almost all these combos are basic. Really basic. Again, this could simply be the developer not showing off more, but from what I have seen up till now, the execution barrier seems to have been lowered quite a bit. Assists seem to extend these basic combos, so that can be there to spruce up the gameplay a little. But so far, none of the high execution combos from any of the games seem to be here. That can be good or bad depending on how it turns out. This is a tentative gripe though. I’d definitely need to see more. To offset some of the simplicity, they do have more complex systems, but we’d have to see how much those systems come into play when it comes to giving this game depth. 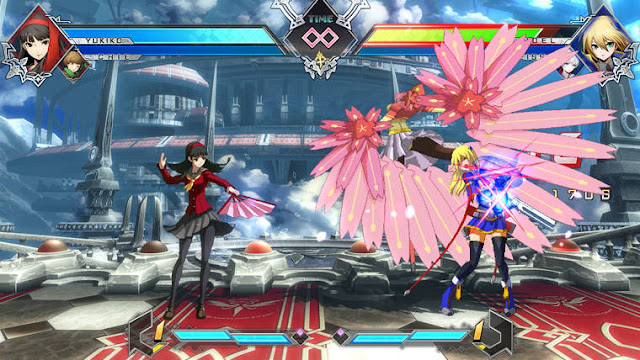 My last minor gripe is the roster so far. This is shaping up to be BlazBlue and friends. I’m aware that of the four franchises, they will have the most characters available. However, I don’t think that means that we should be getting a trailer that is JUST Blazblue characters. For a better understanding of the roster so far: RWBY has two characters, UNIEL has 4, P4 has four, and BlazBlue has ten. Now, I know the name of the game is BlazBlue Cross blah blah blah. But, would a little bit more even representation hurt? Would it? UNIEL has a pretty decent cast, and so does P4. RWBY…I’m not too into that, so that’ll be for you all to discuss. So fat, twenty characters are confirmed. How many will the base roster be? And how much representation will each property have? I hope it evens out a bit. I think each franchise has enough characters to make that happen.
Finally, me just ranting. Fuck them rat bitches Rachel, Noel, and v-13. Where the fuck is best girl Naoto Shirogane? Why did we need Tager and Waldstein in the same fucking game?! Fuck Chie till the end of days (feat. Yukiko). Where’s my boy Kanji?! Why is Makoto here?? Is it the underboob? How the fuck did Es get in?! She was only in the last game! Then can we get Enkido? Byakuya? Phonon?? Maybe some Susano’o?? Nine the Phantom?? Hibiki?! I KNOW WHAT I SAID ABOUT BLAZEBLUE REPRESENTATION. I got nothing for RWBY. I’m waiting for Yang though. But I swear to each of these’s games respective gods that I better get Naoto Shiragane.
…I apologize for going off the rails there a bit. But! What do you guys think of BBCTB so far? Good? Great? Shit? And are you waiting for a character like me? Let us know.